ChaCha is a great company that I worked with for quite a while when I first launched my agency. It's hard to believe that ChaCha is 8 years old… the company is agile and is constantly moving and improving. They're not a Valley company, so they aren't always in the spotlight – but they do always stick in the top websites in the world for traffic. And over time, I've seen them accumulate a huge following. That following sumerep kesempatan anyar kanggo bisnis.

With over 7,000 influencers, the reach of their network is quite staggering – reaching hundreds of millions of people. Influencers are vetted to ensure profanity isn't utilized, the messages are never misleading, and the advertisement is clearly indicated.

When an influencer logs into Social Reactor, they're provided a categorized list of the current campaigns. This isn't an automated system where Social Reactor can decide what to push and do it on your behalf. Influencers can read, review and participate in the campaigns of their choosing. They can also monitor their commissions – ignore mine since I'm just getting started ;). 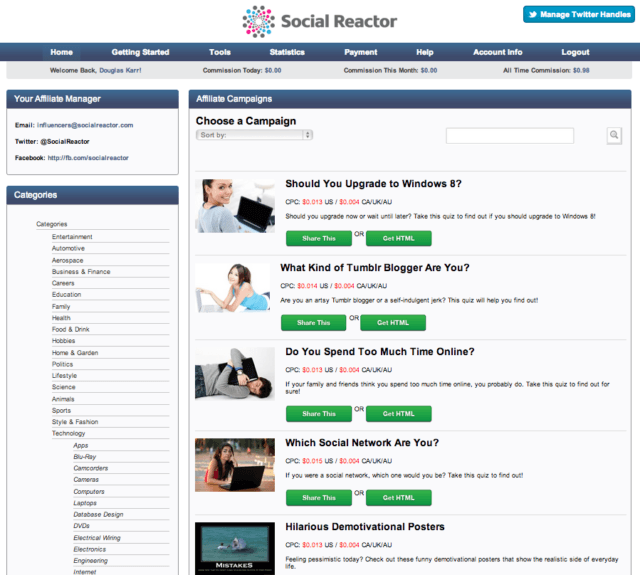 If you're an influencer, Social Reactor wants you onboard, too! They're looking for social influencers who have true connections with their followers. They're seeking leaders in social channels who understand their audience. They need smart people who know how to craft strong messages that inspire their listeners to act. Join Social Reactor's influencers saiki.